Matt's Miscellany
I'm good at two things: loving my wife and mowing the yard. Everything else is an adventure. *** All opinions expressed on this blog are the sole opinion of the host. ***

Well, we've been working really hard on the landscaping this year. 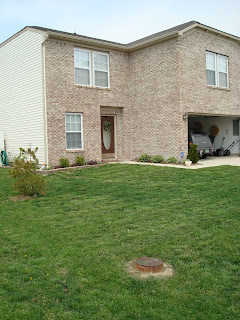 I've planted grass out front and we've even added a few yard decorations. 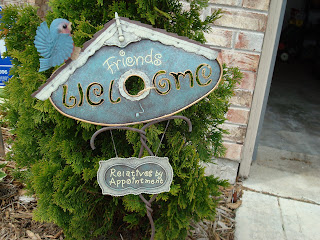 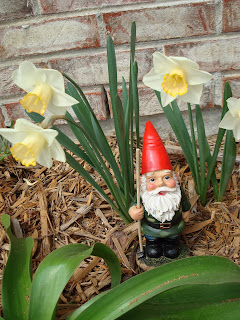 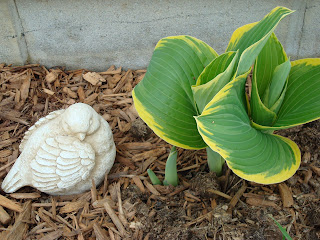 Today, I feel a lot like this kitten in the video.

Video from Youtube. Owner/Videographer A Viklund
Posted by Matt's Miscellany at 11:47 AM No comments:

Okay, so many of you may not know, but my big brother coaches the North White baseball team. He's got himself a very talented squad this year, and has accumulated a 7-3 record as of today. I'd thought I would post an update of their last few games.

They also beat rival Twin Lakes. It looks like they could really make a run for the sectional and conference titles this year. Good luck and I'll update this in the near future.

Posted by Matt's Miscellany at 6:56 AM No comments: 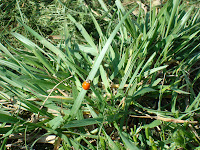 The first Lady Bug of spring. 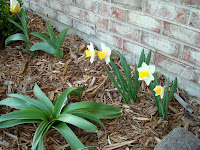 Our flowers our starting to bloom. 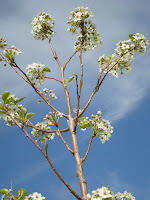 One of the pear trees we planted as a memorial to my grandmother. 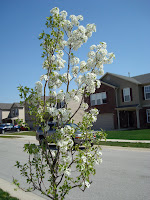 What we think is a pear try in front of the house. 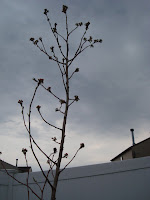 Earlier in the month, we took this gloomy-gloom shot of the tree.
Posted by Matt's Miscellany at 6:58 AM No comments: 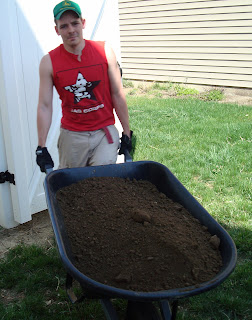 So I've been busy, really busy. I've taken to the soil this spring. My first task was to re-seed the front lawn, but I had to do a lot of soil work to get things right. Overall, things seem to be working well. Yesterday, I begun my lawn work in the back. It started with a truckload of nutrient heavy topsoil from McCarty Landscaping. As you can see, it almost crushed the truck. Once I got the soil home, I used the wheel barrel to move it into the backyard. All of it was pretty tough work. I also got a load of aged manure for my wifes garden. 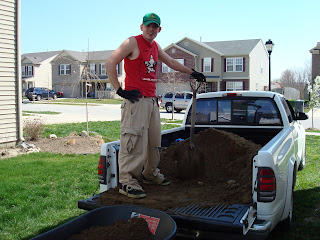 Today, I'm going to build her a raised garden bed so that she can begin to plant this weekend. I also want to extend my drains further using the 'french drain basin' technique. Most of all, I plan on putting together my Brinkman Grill. 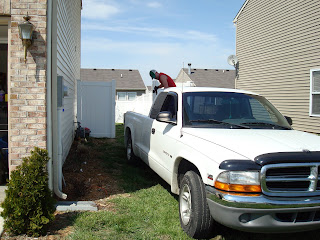 I love sunny weather.
Posted by Matt's Miscellany at 6:48 AM No comments:

At 4:37 am, Southern Indiana felt the rattle of a 5.2 magnitude earthquake. The epicenter was somewhere in Southern Illinois, but the Indy Star reports that shakes were felt throughout Indiana. I, of course, was in bed. I did here some things fall (a few bowls fell of the counter), but blamed Little Kitty for the crashes originally. According to the article, an Indiana Professor in the Geological department states, "What we’re seeing today is fairly typical in this area. It seems like we get earthquakes about this size every 15 years."

Came across this video via the blog Essays & Effluvia, its a recent Discovery Channel. It's the first time I've seen the commercial (since I don't subscribe to cable television) so I'm not sure what shows they're featuring, but it's still a great commercial.

Posted by Matt's Miscellany at 5:15 AM No comments:

In this recent article, Janie Gabbett state's the increasing trend towards social responsibility in the restaurant industry. Full product disclosure is becoming more and more important as consumers find themselves eating more meals on the go. This trend along with the popularity of environmentally friendly restaurants like Burgerville is an interesting development.

Ahhhh, but when are we going to get a Burgerville in the midwest!

Close to 80 percent of consumers claim they would respond favorably to a socially responsible restaurant by visiting more often and/or paying more, according to a recent study.

Study participants ranked nutritional disclosure and nutritional accommodations high on their lists out of 17 social issues.

"We find increasingly strong evidence that consumers expect both chain and independent restaurants to be more socially responsive, and nutrition is a clear priority," Technomic Executive Vice President Bob Goldin said in a news release.

Recently, I came across a great blog wrote by Anita Bruzzese. Here "On the Job" blog gives helpful workplace advice. In her April 14th blog, she covers the topic of fatherly influence. I found the information to be very, very interesting and wanted to share. For the full blog visit her page. ON THE JOB BLOG.

Here's a quick excerpt of what she writes,

In his book, “The Father Factor: How Your Father’s Legacy Impacts Your Career,” Poulter says there are five kinds of fathering styles that create the father factor.

Those are:
• Superachieving: “It’s all about looking good. The fathers work really hard, and they have kids that are very responsible and very driven,” Poulter says. “But there’s also the shame factor – children of these fathers never feel good enough.”
• Time bomb: “This dad is often alcoholic or very volatile and heavy-handed,” Poulter says. “The kids learn early on how to read people in order to survive.” As workers, these people often avoid conflict, yelling and expressing any degree of anger or frustration, emotional tension or dealing with unresolved conflict in the workplace. These workers often have a lot of anxiety, and suffer from low self-esteem on the job.
• Passive: “This father showed his love through his actions. He was very responsible and stable, but lacked courage and motivation,” Poulter says. As a result, these children become workers who are emotionally distant, which is difficult in today’s labor force where employees may change jobs or careers many times, and need to be able to connect with people again and again. “These are the kinds of kids who grew up with a father that was asleep on the couch and they’d say, ‘Is he asleep or is he dead?’ It was hard to tell because he was so passive. As a result, in the workplace these people have a hard time relating to other males.”
• Absent: “This is the father who is not involved in a child’s life,” Poulter says. “When the first man we love leaves our lives, it often produces an angry or aloof employee in the workplace.” He stresses that a father’s death is a loss, but his involuntary departure versus a voluntary exit creates a different effect on children. “Absent fathering – from indifference to physical abandonment – will lead to a coping with profound sadness or to anger issues such as violence, criminal behavior and white collar crime.”
• Compassionate mentor. “This is where we all want to be, what we should all work toward,” Poulter says. “These fathers help a child find a roadmap and help center them. In the workplace, these are the children that grow up to motivate people around them, and empower others, as they were as children.”
Posted by Matt's Miscellany at 5:44 AM No comments: 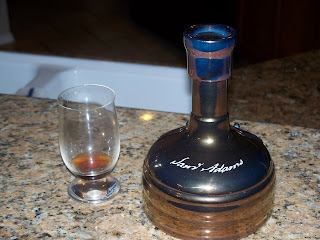 Yes, no matter how you say it, Utopias are the ultimate drink. Yesterday, I was a able to taste the smooth brew and smell the brandy colored 13 year old brew. With only about 12,000 bottles produced and a hefty price tag around $130, this brew is tough to find, but my brother-in-law was able to snag one through some good friends of his.

At first sip, you are amazed at the quality of the beer. As Ann Luisa Cortissoz writes in the Boston Globe, "It's made using the basic brewers' arsenal - hops, malt, yeast, water - but at 27 percent alcohol by volume, and with flavors that call to mind a cognac or a fine sherry, this is beer taken to the extremes of flavor and alcohol content."

This beer is really a true reminder of the depths and quality that beer can be. Even the bottle is awesome. Shaped like an old style brew kettle with sliding doors revealing the Sam Adams logo, it gives an essence of the old "I dream a Genie" lamp. For all of you beer lovers, this is a must try. That is, if you can get your hands on some. 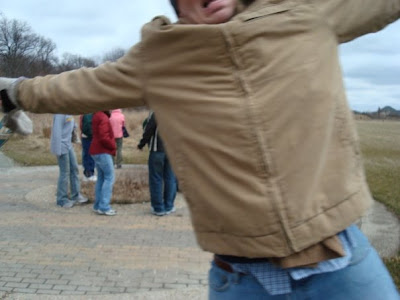 I've been wanting to do a special post for my 100th posting, and I felt that this would be a great way to celebrate this milestone. Here's five things that you may (or may not have) known about me.

First, Stacy and I eloped on a weekday at the Marion County courthouse. We had tried to elope before at such locations as Hart Michigan, Angola Indiana, Dayton Ohio, and Cozumel Mexico, but things never worked out. Finally, we just decided that Indianapolis was the best place for us.

Here's another little tidbit about my wedding day, I not only was the groom, but I also performed the tasks of photographer, florist, and cake cutter.

Second, I have visited Cancun Mexico five times in my life. Twice with my parents as a child, once with the 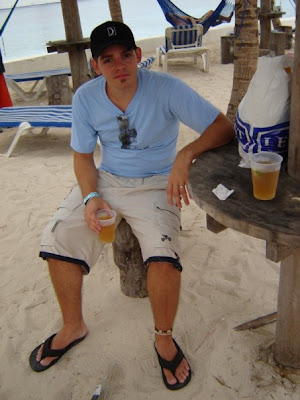 Spanish club in highschool, and twice with Stacy. 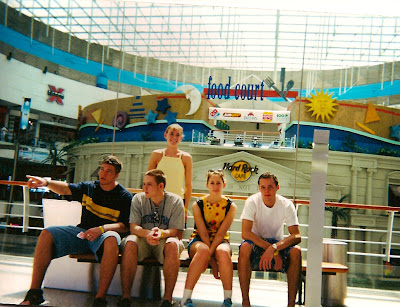 The third factoid about me involves my dog named Showbiz. A lot of people think that the name Showbiz was derived from the old pizza joint called Showbiz Pizza. 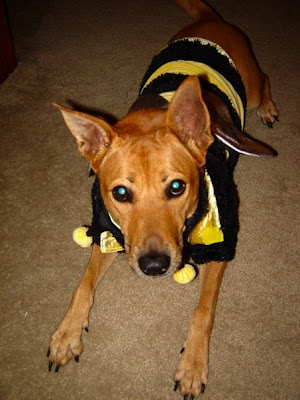 But they are wrong, Showbiz is a descriptive name about here cheerful and personable disposition. She has always been a very friendly dog, but that's what I get for raising her in a fraternity house.

Fourthly, I have attended four colleges. I began my undergraduate education at Tri-State University. There I was a member of the Delta Chi Fraternity, Student Representative, Resident Assistant, and all around nice guy. 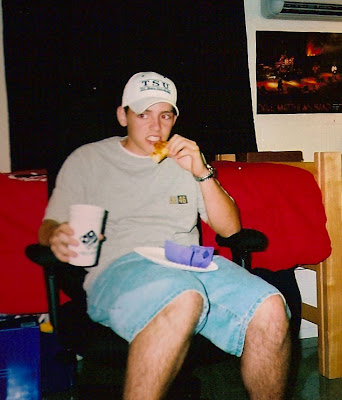 After falling in love with my beautiful wife, Stacy, I transferred to IUPUI where I finished my degree in General Studies. Following IUPUI, I entered a Master's program at the American University, but withdrew from the program before classes started. I then entered the Master in Business Administration program through Indiana Wesleyan University, where I graduated in August of 2007. 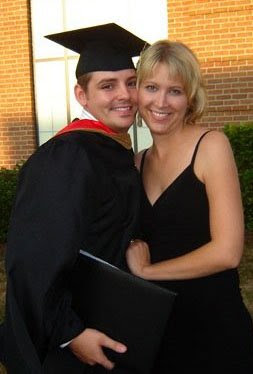 Although there is several things in which I haven't mentioned, such as my book, Passion Zone "Developing Passion in Business", my keynote speeches for organization such as America Reads and the Greenwood Chamber of Commerce, my final 'did ya know' involves a very early failure in my life. I actually attended pre-school twice. Initially, I was withheld because of my age. 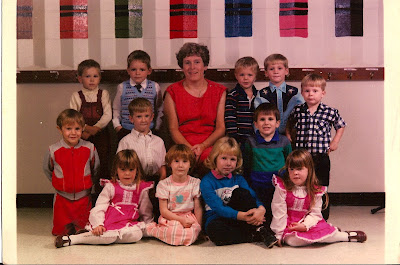 Alright, that's five things. I hope you know a little more about me.
Posted by Matt's Miscellany at 12:44 PM 1 comment: