Matt's Miscellany
I'm good at two things: loving my wife and mowing the yard. Everything else is an adventure. *** All opinions expressed on this blog are the sole opinion of the host. ***

So Stacy doesn't believe that we have frogs in our yard. She thinks that I am a. crazy or b. mistaking the likeness of a toad as a frog. But...ho,ho,ho...I'm get to show her. I caught one today. It was jumping from the lawn mower. So using my cat like reflexes, I pounced on the little guy, trapping him in my hat. Then, after a few minutes of deliberation, I decided to make a little home for the guy. Just something small, made out of tupperware with air holes, so that he could hang out in the AC while we waited for Stacy to get off work.

The story doesn't end here. After I found the tupperware bowl I wanted, I went to take him out of my hat, and he wasn't there. He had jumped out the backend, and was setting on a muffin looking at me. No keep in my that this is taking place in the kitchen. As I tried to put him in the bowl, he hopped behind the knife set. When I moved the knives, he hopped behind the spices. And then he disapeared. I started to freak out a little at this point. I started moving everything off the counter, and crawling around on the floor. Finally, i saw him by the stove, but before I could mutter a word...the little guy jumped behind the stove.

After a few minutes of panicking, I finally called Stacy and told her that I had an emergency. Of course, she thought I cut myself again...but I didn't, this was worse. I lost a frog behind the stove.

She told me to move out the stove, and I did...and the little guy wasn't there. I looked and looked....finally I found him tucked under the stove plug-in. Using a broom and the bowl, I trapped him, photographed him, and now he's hanging out until Stacy gets home.

I may take him to the bus stop, just so he doesn't escape again. But anyways, let me introduce you to my new little friend, Mr. Frog. 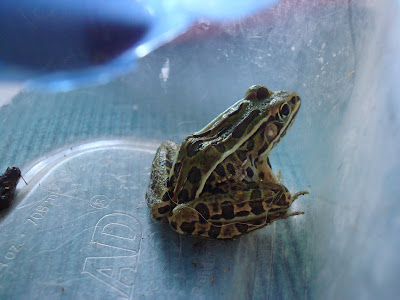 From what I've been able to find out he's a leopard frog. Here's what wikipedia says about these little guys...

Leopard frogs are also called meadow frogs or cow frogs. They are the archetypal "grass frogs" of North America, a collection of species within the true frog genus (Rana). They are generally very similar, green with prominent black spotting (though actually more like that of a cheetah than that of a leopard). They can be told apart by their distribution and certain rather subtle ecological, behavioral, morphological and genetic traits. Their range extends throughout temperate and subtropical North America to northern Mexico with some species found even further south.

Once abundant in North America, their population has declined in recent years because of pollution and deforestation. Leopard frogs are often used as environmental indicator species because of their heightened sensitivity to chemical pollutants found in the air and water, and they are commonly used as dissection specimens in biology classrooms. They were subject of some pioneering studies in evolutionary biology in the 20th century, and continue to be of much interest to various disciplines of biology.

The leopard frogs were often separated with the American Bullfrog and relatives in a genus Lithobates - the common name "cow frogs" (as in "smaller than a bull") refers to their close relationship. But Lithobathes is presently seen as a subgenus of Rana by most authors, and as it seems it does not actually contain the leopard-bullfrog group.

Posted by Matt's Miscellany at 1:45 PM